On July 26th, Panda Express will launch a vegan version of its iconic orange chicken at test locations in the greater New York City and Los Angeles areas. The new Beyond The Original Orange Chicken is made in collaboration with Beyond Meat and contains a completely plant-based breading and vegan sauce, as VegNews can confirm. Panda Express created a vegan version of its iconic orange chicken, which has been on the chain’s menu since 1987, to meet customer demand for plant-based options and to attract a new audience looking for meatless meals.

“As the creator of The Original Orange Chicken, Panda has significant brand equity for this American staple food from China. We partnered with Beyond Meat to develop Beyond the Original Orange Chicken to capture the irresistibly crunchy texture of our signature main course while still providing our guests with a plant-based option of the dish they know and love, ”said Chef Jimmy Wang, Executive Director of Culinary Innovation at Panda Express, VegNews said. “This partnership perfectly combines Panda’s expertise in American-Chinese recipes and Beyond Meat’s industry-leading vegetable protein knowledge to create a fresh new take on a classic favorite.”

While the new vegan orange chicken will only be available at the limited trial locations while supplies last, its performance will influence Panda Express’s strategy of wider adoption. “With this regional launch, we’re gaining insights and learning how to enhance the guest experience with this brand new product for a broader future rollout,” said Wang. “We are confident that people will love the new menu item.”

Before 2019, Panda Express didn’t offer much to customers looking for non-animal-based dishes, as many of its plant-based products were made with chicken broth and animal spices. However, after working with the Vegan Outreach organization, Panda Express has reformulated some of its products to remove the animal ingredients, including its first vegan main course: eggplant tofu (available at select locations). Other vegan-friendly options at Panda Express are Super Greens Mixed Vegetables along with white and brown rice.

While Panda Express, in collaboration with Vegan Outreach, removed ingredients from chicken from its Chow Mein and described the dish as “vegetable”, the Chow Mein at Panda Express is not vegan-friendly because it contains eggs. Panda Express does not advertise any of its items as “vegan” due to cross contamination issues.

Beyond Meat is into vegan chicken 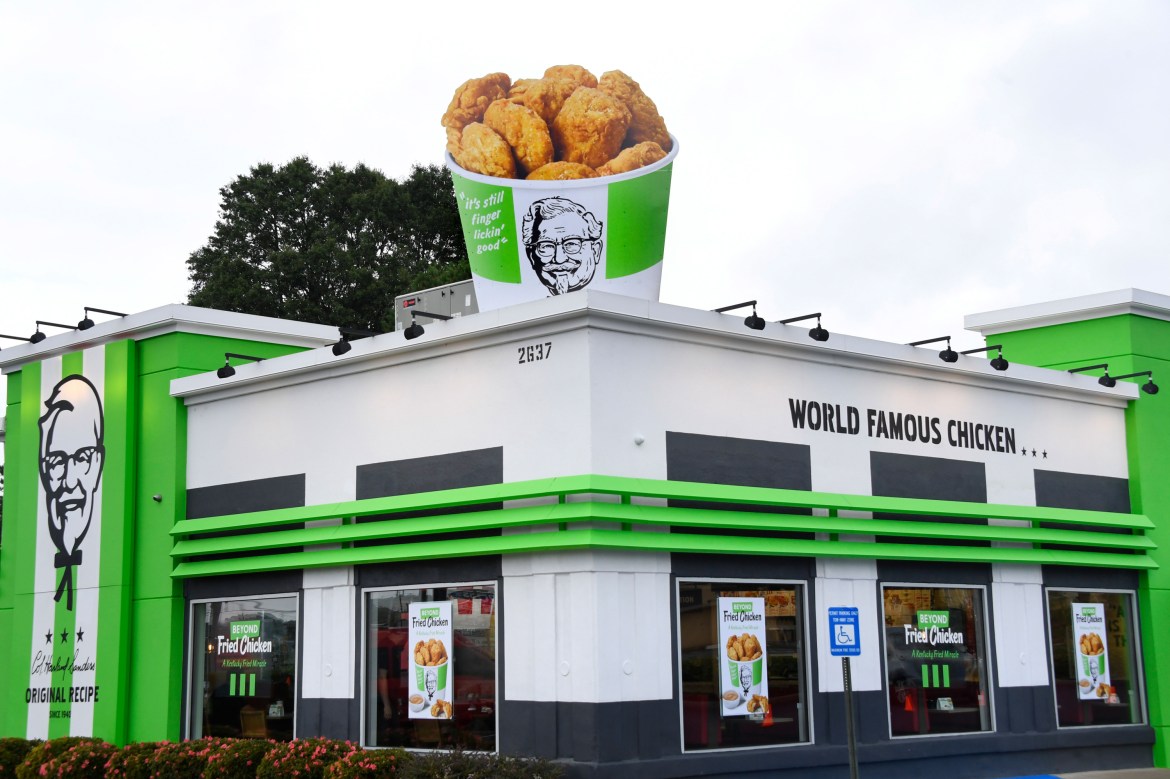 And while KFC is weighing its options, 400 restaurants across the country have just added an all-new vegan chicken product from Beyond Meat. After Beyond Meat discontinued its previous iteration of chicken strips in 2012, it spent a decade developing new vegan chicken that mimicked its animal counterpart in every way. The brand’s Beyond Chicken Tenders – made from broad beans and pea protein – are now available on the foodservice channel, and restaurants including traditional chicken and winged stores, pubs, and pizza chains are using them in a variety of dishes to replace animal meat.

Wisconsin-based chain Toppers Pizza, which last year added a vegan menu developed by Milwaukee-based vegan chef Melanie Manuel, is using the new Beyond Chicken Tenders as a topping for their new Buffalo Chicken-Less Topper Pizza and Vegan Nashville Hot & Crispy Pizza. The chain also serves the breaded tender as a starter, an approach that other chains such as Sarpino’s Pizza are also following. Sacramento-based vegan chain Burger Patch – the first restaurant to launch Beyond Burger in California’s capital in 2017 – offers vegan versions of classic chicken dishes with the new Beyond Chicken Tenders, including a flavorful and crispy chicken sandwich.

Once the option launches on July 26th, you will be able to find all of the Panda Express locations that offer the Beyond The Original Orange Chicken Here.

Spain currently has its largest range of vegan meat and cheese to date. And there are almost 50 products.

Moby just wrote a vegan cookbook. And all proceeds go towards saving animals.